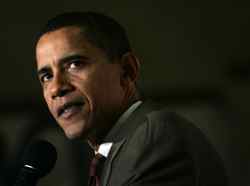 No one knows whether this approach would have worked in better economic times. After all, the Republicans since Nixon had perfected their "southern strategy" of appealing to the white working class on racist lines, and for the most part, it had worked. This time, it had an unexpected result. The deep South voted more enthusiastically for McCain than it had for Bush, showing how strong its racist feelings still are. But presumably, the mere sight of a Black presidential candidate would have sufficed to mobilize these voters. They did not need the McCain-Palin arguments, which had been aimed at the traditional Reagan Democrats, workers who would vote against their best economic interest.

The result of the campaign is both that areas that had been Republican in the past, such as Indiana, went for Obama. But as important, vast parts of the country turned against them. Not a single Republican congressman remains in the whole of the North East. The West coast is equally now solidly Democrat, as are other lesser regions. The moderate Republicans, once a major and at times dominant part of the Party, have all but disappeared. This has left many of the surviving governors and other officials understandably concerned and the battle within the party is now on between those who would follow Palin and those who feel this would doom the Republicans forever.

This development, however, also has an impact on the Democrats. Obama ran a very centrist campaign, arguing that people were tired of partisan divisions and wanted, in effect, a government of national unity. The obvious temptation is to try and fill the vacuum at the center, abandoned by the Republicans, moving the Democrats rightwards. His first appointments have been very much in that direction. He has chosen relatively conservative officials in both the economic and foreign policy spheres, drawing heavily on people who had served Clinton. Clinton had made a point of what he called "triangulation", placing himself in opposition to his party as well as to the Republicans. His so called welfare reforms were aimed at greatly diminishing the welfare state. His Treasury Secretary, Summers, was largely responsible for the deregulation of the financial markets that have led to the present crisis. To find Summers and his colleagues at the center of the new Obama administration is cause for great concern. Add to this the fact that much of Obama’s campaign funding came from Wall Street and we have reason to worry about the direction the new government will take.

In foreign policy as well, retaining Gates in Defence, who was a loyal Bush servant (as well as earlier having been involved in Reagan’s mad Iran-Contra conspiracy) and surrounding himself with advisers from the military is also worrying. To be sure, all this may be a Machiavellian tactic to allow for more radical measures at a later date. But policy is also formed by those chosen to implement it.

So far, not one major appointment has come from the left of the Democratic party. Economists who have been critical of the Bush deregulation, like Paul Krugman, James Galbraith and Joseph Stiglitz, the former head of Clintons National Economic Council, have been prominent by their absence. Nor have we seen anyone coming from the vast anti-war movement, that was largely responsible for Obama’s candidacy. This is obviously an attempt to gather Republican support for Obama’s policies, but the Democrats have enough votes to push through most of what they had argued for over the last few years.

All this is worryingly reminiscent of Jack Kennedy’s first months. Obama has often been compared to him for his eloquence and charisma. But Kennedy too, once elected, chose a cabinet whose major posts were filled by Republicans. He also found himself drawn deeper into the Viet-Nam war in a way that may resemble Obama’s risks in Afghanistan. Here he has been critical from the start of the Republicans underplaying this war and arguing for more troops. The American press has paid little attention to European doubts about the war. The fact that all the French NGOs in Afghanistan argued before the French parliament that the war was not only unwinnable but basically unwise, was not reported in the American press. Ironically, it was Donald Rumsfeld who argued in the NY Times recently against an increase of troops there.

It can be argued that Obama has focused all his energies on the horrendous economic situation. He is proposing an ambitious program of public works for which Republican backing would be helpful. But noone has claimed that this alone will suffice to rescue the country from impending depression. The collapse of the country’s infrastructure is a problem that has been with us for decades. Gunnar Myrdal, the famed Swedish economist, wrote about it in the 60s. In recent years, it has been the victim of deliberate neglect from Republican administrations, determined to cut down on all expenditures in the public sectors- with the notable exception of war. Now, the reliable Keynesian mechanism is back in favor, with financiers like Felix Rohayton, arguing in favor of multi-billion dollar expenditures. Obama hopes to re-create some two and a half million jobs but that number will barely cover those that will be lost in the private sector in the coming few years.

Unfortunately, the debate in the media and in the Congress on what should be done, has been terribly limited. We are paying, in part, for the disappearance of an informed left in American politics. The last time that parties to the left of the Democrats played any role, was in l948, when both the Socialists and Henry Wallace’s Progressive Party had substantial public support. The Democrat Truman ran on a platform far to the left of any proposed in the recent elections, arguing for national health insurance, more public power and many other social democratic proposals. During the war, a quarter of Americans thought that America would have a socialist government when peace came, as was to happen throughout Western Europe. It was the joint effect of the Cold War and the McCarthy Red Scare that would put an end to those ideas for decades to come. (A period which I discuss in my recent book: Una Educacion Politica, Peninsula, 2008). The results is that no one dares propose a socialist alternative. Even when most of Western Europe followed Gordon Brown’s lead in partially nationalizing the troubled banking system, the Americans stayed on the sidelines. The twenty billion dollar loan to CITI bank was enough to buy up the whole of this financial giant, so depressed were its stock prices. But Bush chose to take only a tiny, symbolic part of the shares, continuing his policy of pouring untold billions into these delinquent banks. I say Bush though clearly he has no idea as to what is happening, other than to repeat his continued faith in "the free market" But one gets the impression that his Secretary of the Treasury, Paulsson, a former football player and English major, hasn’t a clue either.

The intellectual feebleness of the Treasury department is only part of a much wider problem Obama will inherit. From its inception, the Bush government has named functionaries that were either incompetent or, worse, opposed ideologically to the tasks they were undertaking. Candidates were chosen on their right wing purity, not on any sign of ability. As a result, whole Departments have been paralyzed-or worse. What we have seen in Iraq is simply a mirror image of what has been happening at home; a government filled with hopeless incompetents who do not even believe in what they should be doing. Hence the Department of Justice is staffed with young radical Republicans who do not believe in enforcing the laws, whether those against racism or against financial dishonesty. The regulatory agencies have largely ceased to function, filled with believers in Friedmans myth of self regulation, which even Summers accepted under Clinton.

Hurricane Katrina had shown the world how dysfunctional the Bush government had become but few realized how extensive the damage was. In his last days, Bush is trying hard to give civil service protection to as many of these hapless appointments as possible. It will take Obama a long time to re-create a government that has any credibility at all. He is well aware of these problems, issues that would be worrying enough in a calm economic climate, but which may prove overwhelming in his first months.

Noone doubts Obama’s intelligence and ability. The contrast with the last eight years is striking enough. But the structural problems he faces are enormous and one can wonder whether his announced cautious and centrist approach will suffice. Everyone cites Roosevelt’s famous first hundred days, when all sorts of new ideas were tossed out, many of which didn’t work. People hope for this kind of daring and innovation. But we musn’t forget that for all his brilliance, Roosevelt failed to end the Great Depression, something which only World War 11 was able to achieve.