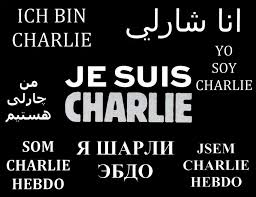 Freedom fighters. The press caricaturists and cartoonists truly deserve that title in the aftermath of the dreadful attack on the Charlie-Hebdo team. The outraged editors and friends of Sens Public here express their unfaltering support to those who carry on with their activities in a time when terror threatens to close down all spaces of discussion and endangers the shared values of critical thinking and resistance to conformism.

The murderers shout their hatred of any kind of free speech and state that violence must triumph over democracy. Their actions are language, a language that answers the ridiculing of dogma with war. As a reaction, it attacks intelligence, intellectual independence, public debate and intellectual solidarities. Murdering an editorial team is an unprecedented crime that represents a break from our cultural heritage as it introduces an ideology that ignores civil and private laws, promoting mutual hatred.

That aggression cannot remain unchallenged. Day after day, we must pursue our exploration of modern conflicts, write more about polemical subjects, oppose anything that might weaken or threaten critical thought, reach out to striving young writers willing to be part of a working community. We have to stand up against the ideological side of fundamentalism and oppose its cultural facet: the tacit acceptance of facts that condemns each and every one of us to a narrow world and makes us too readily embrace that set expression « There is no alternative ».

This is probably not enough. Thousands of young Europeans are merely surviving; they are deprived of integration and financial opportunities. The Republic’s ghettos might have calmed down after the violent urban riots but fundamentalism never ceased recruiting individuals leading aimless lives for whom brutal transgression represents an opportunity to achieve a degree of fame and glamour. Charlie stands for liberty and against all hypocrisies. It supports integration against community patterns: the killers who wanted to voice their hatred chose the wrong target! Charlie’s stance against indifference and contempt is an essential part of the Republican pact and we need the talent and disrespect of such strong-minded artists and editorial writers.

José Saramago’s philosophical fiction entitled Death with Interruptions ends with the fantasy of Death suddenly becoming unwilling to claim lives after being awed by the performance of a cellist who “played as if he were taking his leave of the world’. It is truthfulness that is being murder. For the Portuguese journalist and novelist, it is a way of saying that the future is not in the hands of statisticians. Preparing for the future requires authentic communication and this is what we practice and build up every day.