French Elections and the Euro 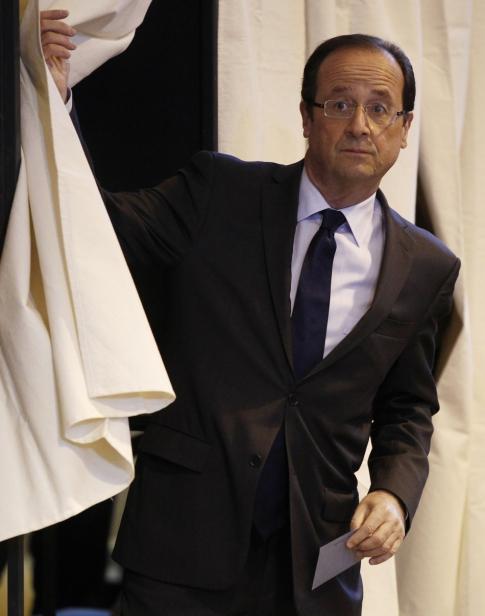 French Elections and the Euro

France’s heart beats on the left, but the country’s wallet is on the right. This may be a cliché, it has an element of truth. The first round of Presidential elections in France takes place on April 22, with a run-off vote on May 6 if there is no clear winner in the first round. Much is at stake not only for France, but for Europe as well. France has the second largest economy in the zone after Germany and its economic policy has a big impact in the region. The election outcome will define France’s response to Europe’s ongoing recession, as well as its stance with respect to its neighbors in the Euro zone. But irrespective of whether France’s heart wins or its wallet wins, the outcome may not be very favorable for the Eurozone.

France’s current presidential system, introduced by General de Gaulle in 1958, confers wider powers on the country’s President than in almost any other developed country. At its introduction these powers were needed to bring an end to the war in Algeria and to bring political stability to the country. Today, these powers mean that the President and his team for the most part define economic policy, with few checks and balances from parliament or the judiciary, and dramatic changes in direction are possible. For example, at the start of the first term of Socialist President François Mitterrand in 1981, the government nationalized broad swathes of the economy which were the electoral promises outlined in the Socialist/Communist coalition’s “Programme Commun’. Massive capital flight ensued, and the value of the French franc plummeted. President Mitterrand had to backtrack, but not before significant damage had been done to the economy.

The French political right, unlike the right in most other developed countries, is not a strong defender of the market. France’s most important party on the right, the Union pour un Mouvement Populaire (UMP) of the incumbent President Nicolas Sarkozy, is a direct descendant of General de Gaulle’s popular movement. Gaullists have always stood for economic self-sufficiency and for a strongly independent defense and foreign policy, and President Sarkozy runs true to type in this regard. On the economic front, his record during his first presidential mandate shows he is a supporter of industrial policy, of national champions, and increasingly, of protectionist trade policy.

Nor does France’s main party on the left, the Socialist Party, support market-based solutions either. Unlike Britain’s Labor Party or Spain’s Partido Socialista Obrero, France’s Socialists under former Party Secretary and Presidential candidate François Hollande remain mired in a decades-old narrative of class struggle, the central role of the State, taxation of the wealthy and strong entitlement programs. The hopes that Mr. Dominique Strauss-Kahn would revitalize the party with his strong economic credentials earned at the International Monetary Fund (IMF) and its robust response to the financial crisis were dashed when he was arrested in New York on charges of molesting a hotel chambermaid, charges that were later dropped. Mr. Strauss-Kahn’s behavior is likely to go down in the history books as a tragedy in terms of foregone opportunity for change.

In France it’s not the government that is the problem, it’s the market

President Reagan famously said: “The government is not the solution, it is the problem.’ 1 This view of the poor effectiveness of the State could not be further from the view of the French about their system. Both the left and right in France support a strong role for the State because it is very popular with voters. People like the cost-effective public health system (“Sécurité Sociale’) which delivers high quality care for all, with far better health outcomes than US healthcare at two-thirds the cost 2 . They broadly support the resource transfer system that guarantees a pension for all on retirement at 62, a safety-net for the least privileged, assistance to working mothers, and tax rebates on the birth of the third child. They enjoy the high quality infrastructure: high speed trains that shuttle at 200 mph between Paris and other major cities, a first rate network of motorways, clean and attractive cities and towns, efficient and reliable nuclear energy, a largely unspoiled rural landscape.

Above all they like the labor market protections that provide those workers in employment with unprecedented security, generous vacations and a 35 hour work week. They don’t like France’s stubbornly high unemployment (10.0% in February 2012 3 ), even higher among the young, but they see this not so much the result of labor market rigidities and loss of competitiveness as the consequence of job outsourcing, cut-throat competition from Asia, and the heartless outcome of the way the market economy functions.

For the French public does not hold much trust in the free-market. A March 2012 poll by GlobeScan of Canada reveals that whereas in Britain, China, Germany and the United States a majority of between 55% and 70% of citizens agreed that the free-market system was the best, in France only 31% do. France had the lowest rate of any of the countries polled by GlobeScan; perhaps a sign of the success of the French State-led model of Sécurité Sociale, entitlements, public infrastructure and employment protection.

The party has to end sometime

Leading up to the election, what none of the major candidates is telling the French public is that their beloved and much admired system of strong State intervention coupled with labor market protections cannot continue in its current form. More precisely, they are not telling the voters that the system, created during the three decades of high growth following the Second World War (“Les Trente Glorieuses’), is now being financed at the margin by public borrowing, and that France’s intractable budget deficit adds to France’s public debt every year.

The current system is unsustainable because France’s government spending has exceeded revenue since the introduction of the Euro ten years ago. France’s sovereign debt today stands at 89% of GDP. This level of debt is not (yet) disastrous, but it is enough that Standard and Poor’s (a credit rating agency), downgraded France’s government debt from AAA to AA+ in January 2012 in the face of the persistent budget deficit and the anemic response to the Eurozone crisis.

In truth, both of the two main candidates recognize that France’s budget deficit must be brought down over time. The manner in which they propose to do this reflects their respective political outlooks. Mr. Hollande proposes to increase taxation of the wealthiest, to a rate of 75% for taxpayers earning over €1 million per year and 45% for those earning more than €150,000 per year 4 . Mr. Sarkozy in contrast, proposes to cut some expenditure by continuing his policy of replacing only one civil servant for two who retire and extending this policy to public workers employed by local authorities. He too, proposes to increase taxation, by imposing a minimum tax rate on French companies and by taxing financial transactions (the “Tobin Tax’). Both candidates, in sum, propose to increase France’s fiscal burden to solve the problem.

But France’s real challenges are not those being discussed by the candidates. There are four structural issues that need attention. First, the country has not had robust economic growth for more than ten years. Second, public expenditure now takes up 57% of GDP, and even before the current crisis it stood at over 50% (see graph). Third, France, as one of the most highly taxed countries in the world, has limited potential to solve the current crisis by taxing more. And most importantly, France’s firms and workers are no longer competitive compared to their peers.

To get out of the current morass, increasing the tax burden – the solution proposed by the two leading candidates – will not be enough. France will not be able to reduce its budget deficit without stronger economic growth, and stronger growth cannot be achieved without improving France’s competitiveness and expanding exports. This, at the base, is why France has low growth and stubbornly high unemployment. French workers are simply not cost-effective compared to their brethren across the Rhine, with whom they share a currency.

The reason for France’s loss of competitiveness compared to Germany lies deep within policy choices that date back nearly half a century and how they relate to the introduction of the Euro. Ten years after the creation of the Eurozone, it is safe to say that European Central Bank (ECB) monetary policy has been closer to that of the Bundesbank than that of the Banque de France: monetary policy favoring a strong Euro rather than enhancing competitiveness. Despite the reign of Mr. Jean-Claude Trichet at the helm of the ECB (now replaced by Mr. Mario Draghi), Eurozone monetary policy has been much more Germanic than Gallic.

To add to this, the policy choices of the two countries over the last 50 years could not have been more different. Germany, traumatized by hyperinflation during the Weimar Republic in 1923, built its postwar growth on the back of a strong Deutschmark. Gains in productivity resulted from internal adjustments in the labor market, control of the wage bill and prudent macro-economic and public expenditure policy. Reunification in 1990 reinforced the internal adjustment mindset as the newly unified German economy had to offset the cost of huge transfers to the former East Germany and regain productivity lost with the merger. Adapting to the newly established Eurozone in 2002 and its policy of a strong Euro did not therefore constitute a break with former policy directions for Germany.

France, in contrast, had always exercised looser monetary policy than Germany, and before the introduction of the Euro, selective and controlled devaluation of the French Franc compared to the Deutschmark had contained French labor costs without the need for major internal adjustment and reform of the labor market. (France was by no means the only country to use this policy. It was widely applied in the countries of Southern Europe that today are mired in the Eurozone crisis.) For France, adopting the Euro required therefore a complete break with the past. France has not yet adjusted.

Between a rock and a hard place

In a nutshell, within today’s Eurozone monetary policy framework France cannot avoid the need to make profound internal reforms in the economy. As long as the country remains in the Eurozone and shares a common currency with Germany, it simply will not be able to regain competitiveness without reforming its labor market and reducing the size of public expenditure. And reform it must, because without reform it will not grow, and without growth it will not be able to reduce its debt.

Irrespective of who wins these elections, there are two possible outcomes for the Eurozone. The first is the more optimistic: the new French President uses his mandate to set in place the profound structural reforms France needs. These would address labor market rigidities, entitlement programs (such as retirement age), civil service reform, and expenditure duplication between the central and regional governments. Entitlements would be means-tested, user fees would be introduced, wastage in public expenditure eliminated. These reforms – not that different from those being implemented in Ireland, Greece and Spain – would lead to a newly revitalized French economy, a gain in competitiveness, renewed growth and manageable public expenditure and debt. But let’s face it: these reforms would be difficult and are likely to be opposed by players in the economy who stand to lose out. No politician could contemplate such a course of action without dread.

The second possible outcome is far bleaker. If France does not reform it will drag down the entire Eurozone. Declining French creditworthiness will raise borrowing costs and necessitate an increase in transfers from Europe (i.e. Germany) to France via the ECB. Under this scenario, Germany’s strong revulsion to finance other countries’ lack of reform will sooner or lead to an economic standoff between the two countries.

And for students of European history, a standoff between Germany and France is not a good thing to envisage.