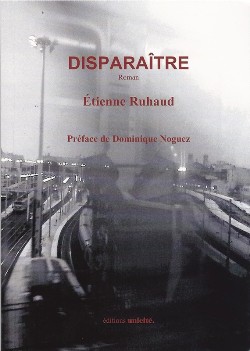 The first novel by Étienne Ruhaud 1 is above all the story of a young man of today. This is a young man from Corrèze came to earn a living in Paris, as mentioned further. We can then think of a success story that would lead from the darkness of Corrèze to the light of Paris. It is far from that and the author catches us by surprise because at the beginning of the novel everything changes and works to the loss of the young hero: the circumstances as much as the character compose the dark and irrecoverable fresco. And precisely this novel contains a modern destiny in the tragic sense, in a mythological form. This is a first reason for reading Disparaître, a short novel whose action takes place alternately indoors (room, home…) and outdoors (suburban, city). The hero endures his dark story because he most often acts through the events and the collective superego. Renaud’s identity is mainly revealed through negation, on the negative of the film: “I have no desire’, “without asking your opinion’, “I do not have the courage to admit this new professional failure’… The title Disparaître here means gradual disappearance behind a very close reality.

This reality is the Paris suburbs, huge urban or peri-urban complex housing a multiplicity of lives in varying conditions. So, the other central character of Disparaître is the suburb, a second reason for reading the book. Life in the suburbs, these are

The journeys: RER, metro, road but also walking. These are the buildings placed at right angles of the cities: supermarkets, fast food, RER stations, HLM. The wanderings of the hero fit with some dark soul in the suburb. The merit of Étienne Ruhaud is to accommodate this soul of the suburbs, sometimes not very glossy but real for many. French literature pays little attention to the suburbs as a place of intrigue, quite wrongly. However, there are references. Blaise Cendrars mentioned the Paris “zone’ in his autobiographical chronicles, corresponding to the 13th arrondissement and beyond. Louis-Ferdinand Céline described the murky suburb where he practised medicine. The closer, the detective novel took the suburbs and the city for scenery. We also think of the thriller, the novel of bad luck, the disabled

Disparaître shows concern with a detail close to the literature review.

But what meaning do we want to give to its staging? It shows a deterioration: “only a few bone shafts’, “a painful logic of concrete, blocks, stunted parks, ghettos….’ If the Paris suburbs have never been bright, the time, in the midst of the global crisis, worsens the abraded painting. The “unsightly’ architectural chaos add the invasion gap of advertising, the portrait of a crowd enduring individual isolation, impoverishment, emotional deprivation or simply lack of love. As if, the dark ensemble had nothing to offer the weak people. Thanks to Étienne Ruhaud for broadening this horizon of the suburbs, of the city as a literary territory.