Imagining the past between the lines of Albert Camus 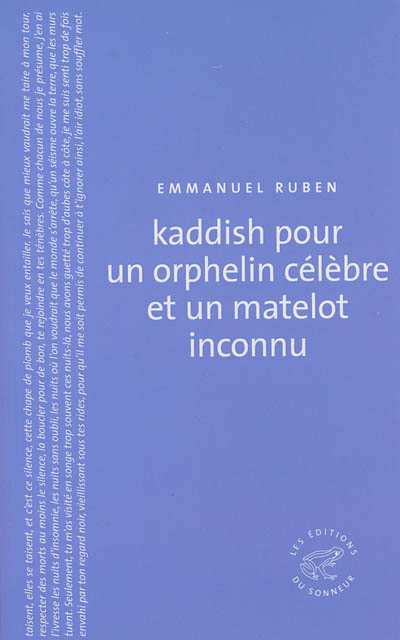 Imagining the past between the lines of Albert Camus

One would think of an exercise in style: rewriting an era through the pen of Albert Camus and entrusting him with a narrator. We match the story to a literary monument and refigure the past 1 by giving it a certain depth. It is nothing of the sort. Emmanuel Ruben continues through his second novel exploring a style of literature in the service of geographical, historical and cultural empathy. The narrator of the book reclaims a parentage to better imagine a time with his desires and horrors, a time suspended between several wars when geographical and intimate territories are recomposed. The reader is reading the book like The Fall with an extremely fine use of the indirect discourse free to transform the edge of this monologue into essential dialogue.

“Yes, I suppose so if you were a communist or fellow traveller, that you had had enough of this Third Republic which was not that of your Berber or Leghorn ancestors. And I imagine you hardly regretted the fall of the revanchist or imperialist Third Republic, born on a massacre, built on the back of coolies, defended on all seas, gunner of Annam and Tonkin, handling the Sword and the Cross, but which soon bleeds before Verdun and ends up committing suicide with a vote of 569 to 80 in front of Pétain.’ 2

In this passage, we sense how the narrator reconstructs through the typical imperfect tense of unfinished trials into the past historic tense evoking the scandal of the end of the Third Republic. Because in reality, the book by Emmanuel Ruben profoundly recounts a history of Algeria and France, colonization justified by the Republican ideology and Algerian independence. The reader navigates with the reliefs of the collective memory and clings to some of the islands of our Mediterranean history. The text is riddled with questions to know who was the grandfather gone too fast.

“I do not aim at brandishing a revolver of origins. The taboo that I am dreaming so much to break, I know I would not even have the strength to bring it up, at least not verbally, and that is why I have only this silent speech for pacing around your totem, at the risk of wandering continuously and taking away indefinitely what I am so eager to know.’ 3

It is not so much a question of imagining a story based on a parentage where inheritance has not been allocated. This novel explores the nooks and crannies of an historic epoch because of the scandal about this non-transmission.

The inversion of the adverb “too soon’ with the addition of nominal sentences plunges us directly into the absurdity of this death, which left little trace. Paradoxically, this absence forms the very condition for the reconstruction of a story without narrator. This incipit refers explicitly in the book to that of The Stranger.

The anaphor is rich because it highlights the echo of this absurd shot. And the reader understands that the unknown grandfather is this stranger so close, so close, holding on to a few lines of a story bursting with curiosity.

The imagined figure of the grandfather reading Camus gives a very interesting effect of mise en abyme. The narrator restores youth of the grandfather with signatures found in the books of Camus. The mother becomes the mediator of this reading for generations.

“Here we are a few years ago, I remember, I tore out of a corner of the nursery library a very small book; the somewhat strange title often taking me aback that announced the cover, of a lavender blue since it was reviewed: Nuptials, followed by Summer. Edition of 68. Your name, the first name of mother read in blue ink on the cover page. She was not even fifteen, she was a student in a Girls’ High School; this very small book she kept secret, from the curious, I am pleased to imagine that it was presented to her at a prize-giving ceremony for excellence; I heard her climbing over the podium with polished parquet to the jury of old Catholic sisters; I see her white-gloved little hand up to receive this little book signed.’ 6

The astute reader might see a delicate hint of the Mots by Jean-Paul Sartre deciphering book covers in the corner of the family library. Who has not walked across these places by extracting the precious book, the one that sometimes says more about the reader than the author? The library then becomes a significant metonymy revealing the reader grandfather. The presence of the books read by the narrator’s mother reflects values, concepts, ideas, desires, wants, aversions. Tell me what you read and I will tell you who you are.

And in an incredible verve, the story skips over a tangible history of the Mediterranean by restoring happily and plainly the relationship between France and Algeria.

“It is not France losing Algeria, nor Algeria losing France. France won the Étoile d’Alger, the Nour pastry, the Ibrahim butchery, the Djoua restaurant, the honey cigars, the kesra, the makroud, the bradj; France won the Kabyle cafes of the passage of the King of Algiers; France won the smile of the spice merchants, Ornano Boulevard, weighing you and serving you, at his stall of abundance, olives, halva, fresh dates, Yes, absolutely my brother, the most recent harvest my brother, with a huge smile at this cheerful, warm French.’ 7

The chronology of the political events, the declarations of Guy Mollet, the independence of Algeria, everything is linked together in the edition of the books of Camus. Finally, there is a question remaining open in the consciousness of the reader that I am: this absurd figure of the grandfather is it a fabrication of hybrid figures of the books Camus? Is there an ingenious composition of The Rebel, of The Stranger, of The Fall and of Nuptials? Fundamentally, this novel is the second volume of a personal history of the Mediterranean. Literature has the power to capture the entire fragments of this violent and warm history and to reflect the contradictions. Unknowingly, the reader and the narrator move forward and bring into the present context this daily and absurd gesture so well exhibited in The Myth of Sisyphus.